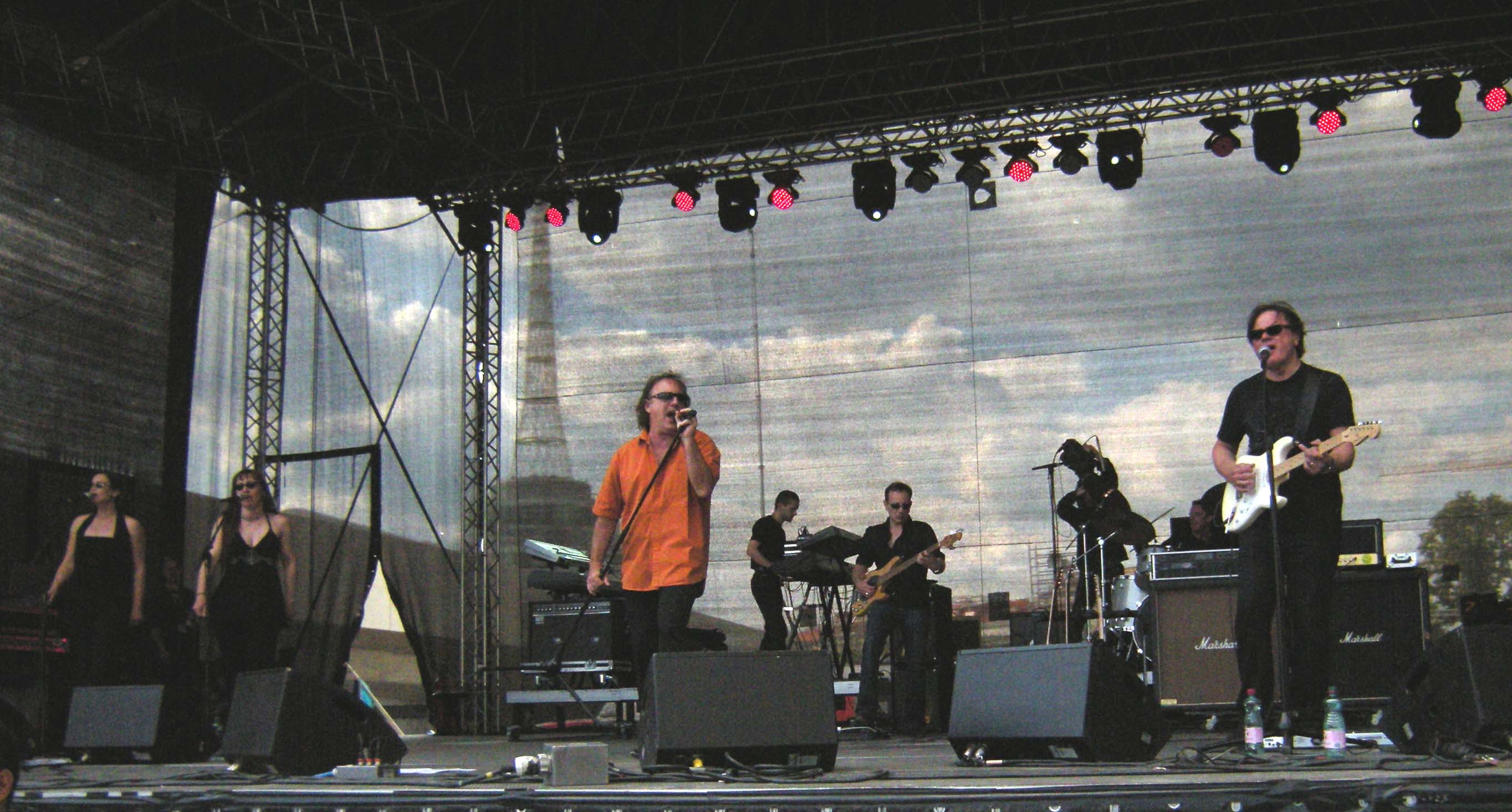 In 1973 Opus was formed in its basic version: Kurt Rene Plisnier (keyb.), former “Sängerknabe” Walter Bachkönig (bass), and Ewald Pfleger (git.). At that time the band was a typical garage band which met for regular sessions. Besides practicing covers from Deep Purple and Colloseum, they practised their first compositions as well, “Opus Null”. They were showing rock versions of “Die Kleine Nachtmusik” and “Der Säbeltanz”.
This was the repertoire for their first concerts in Burgenland and in Styria. Günther Grasmuck on drums takes the band closer to the specific Opus-sound. Hans Palier joins the band for 6 years before he changes over to The White Stars. At that time they received their first award at the Styrian Band Contest. In 1978 Opus organizes the remarkable Austrian Rock Festival which became an institution. Also in that year Opus moved to Rötz 15, in Judendorf/Graz. 1979, Herwig Rüdisser is found as the result of an ’ad’ and the typical sound of Opus is born.

1980 Opus records the first album. They produce their first album “Daydreams” with Peter Janda in Hilpoltstein,Germany, which appears on phonogram. “Daydreams” is the first and the last album which still has affinity to classical music. In 1980 Niki Gruber replaces Walter who decides to do classic.

In 1981 Opus works with the Star Producer Peter Müller, which turns out to be extremely creative. “Eleven” brings the first Gold to OPUS. The singles “Eleven” and “Flying High” become top hits in Austria. AMA takes over the management of Opus. With Christopher Cross and Lou Reed they have a concert at the Arena die Verona. In 1982 they received the “Austrian Journalists” prize for “Eleven”. In the autumn the “Yellow Fellows” present the concept album “Opusition”. The performance in the show “Auf los geht´s los”, in November 22nd, takes Opus across the border of Austria. In 1983 100.000 enthusiastic fans come to OPUS in 65 concerts. At the Ö3-Open Air in the Wiener West stadium they were on stage with Wolfgang Ambros and Rainhard Fendrich (Meilenstein). The records are available now in Germany, Switzerland, the Benelux States, Sweden, Italy und Singapore. In 1984, after three months of working with Peter Müller in the studio on “Up and Down”, the fourth album is released. After that they go on tour in Austria and Germany. The characteristic choir of Opus is hired by Falco for his Album “Junge Römer”.

The Hit – Life is Life

On September 2nd 1984 Opus celebrates their 11th anniversary at the Stadium of Oberwart with thousands of fans. Opus dedicates the song “LIFE IS LIFE” to them. LIFE IS LIFE becomes the nr.1 in the Austrian Charts and goes around the world in 1985/86. Opus is present in TV shows such as Top of the Pops/GB, Solid Gold, MTV. They give concerts in The Hippodrome in Ibiza, Bosporus, in Central America and South America. The Juno Award (Canada) for the best single production of the year goes to Opus. 25.000 friends come to Graz, Liebenau, to see “OPUS and Friends”. Opus gets gold for SOLO which appears on the new record company Polygram. They have been on tour with Stevie Niks, the Singer of Fleetwood Mac, in the USA. Opus are also well known in the former GDR, CSSR and in Bulgaria. They received several awards around the world, even in South America. They won the MIDEM Trophee. Their records are even available at “Tower Records” in New York. “Rock On The Rocks” is a “cool” performance at The Kitzsteinhorn in Tyrol.

In 1987 the seventh album “Opus” is released in Austria, Germany and The Netherlands. It is produced by Eddy Offord, Peter Müller and Ewald Pfleger. After LIFE IS LIFE, WHITELAND becomes one of their biggest hits. A huge amount of the royalties was transferred to Greenpeace. The Olympic Stadium in Moscow was sold out three times. On New Year’s Eve, Opus did a commercial for the Olympic Games in Calgary. The single “Faster and Faster” became the favourite song of the Austrian Athletics. In 1989 Erwin Musper, the producer of “Wind Of Change” for the Scorpions was engaged for the album “Magical Touch”. “When The Night Comes” is the fourth video, produced by Dolezal & Rossacher. The single “A Night In Vienna” is a tribute from Opus to the Viennese Waltz.

1991: new record company (STINO Media GmbH) new management
1992: Bass player Niki leaves the band Ewald Pfleger produces “Walking On Air”
1993: Opus at the “Vienna Ball” during the MIDEM in Cannes Opus celebrates “Twenty Is A Plenty” Jubilee at the Grazer Orpheum. They also record live the album “Jubilee”.
1996: The title “Just For Fun” is released as first single of the CD “Love, God & Radio”. The philosophy of this new creation is a combination of the sounds of the sixties and the well known Opus ingredients. These are blended to the particular “Live Band” sound of Opus.
1997: New Single “Hands In The Air”, different TV Shows in Germany and Austria, big Live Event in Moscow, Gorkipark.
1998: “Viva Austria”, especially written for the Austrian Football team at the World Championship in France sold 30.000 copies in Austria.