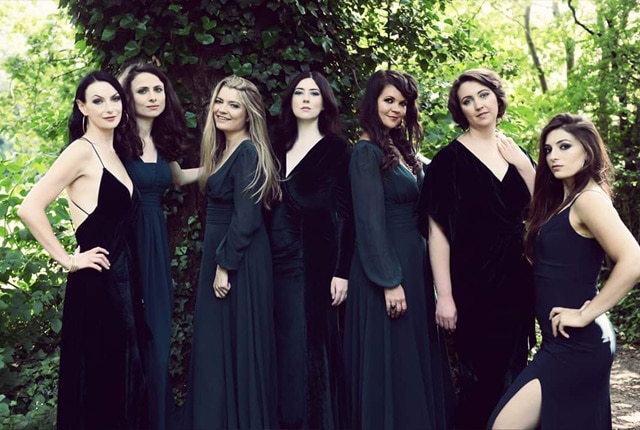 Mediaeval Baebes’ exquisite storybook opened its pages in 1996. A group of friends broke into a North London cemetery and sang together, clad in flowing white gowns and crowns of ivy.

Are you interested in booking Mediaeval Baebes for an event or festival? Please contact us for further information. We are happy to advise you about options and possibilities.

Who are the Mediaeval Baebes

Pulling lyrics from medieval texts and setting them to original scores using mediaeval and classical instruments, whilst singing in an impressive array of long forgotten languages, the Baebes offered a unique musical beauty and outstanding talent. Their choice of mediaeval texts were dramatic, obscure and dark in topic. They remarked upon the inevitability of death, the pointlessness of material possessions, the horror of unrequited love or the dangers of imbibing too much alcohol. Some themes are timeless!

Twelve years later, these fair maidens have placed three albums into the top of the classical charts. Their contribution to the BBC production of The Virgin Queen (composed by Martin Phipps) resulted in a deserved Ivor Novello Award 2007 for best television soundtrack.

Mediaeval Baebes have performed before enthusiastic audiences in the UK, United States, Canada and Europe in venues ranging from castles and caves to nightclubs and Renaissance Fayres. They have toured with Jools Holland and played at The Royal Albert Hall, Carnglaze Caverns in Cornwall, Jersey Opera House, Tewkesbury Abbey, supported Michael Flatley in Hyde Park, and performed at the legendary Lilith Fair.

Their album ‘Illumination’ takes a fresher contemporary direction whilst retaining the ethereal beauty of the Baebes’ historical and musical influences.

The group are working on the development of their visual performance. You will be able to experience their fairytale whimsy, otherworldly enchantment, and supernatural allure in a brand new theatrical spectacular.