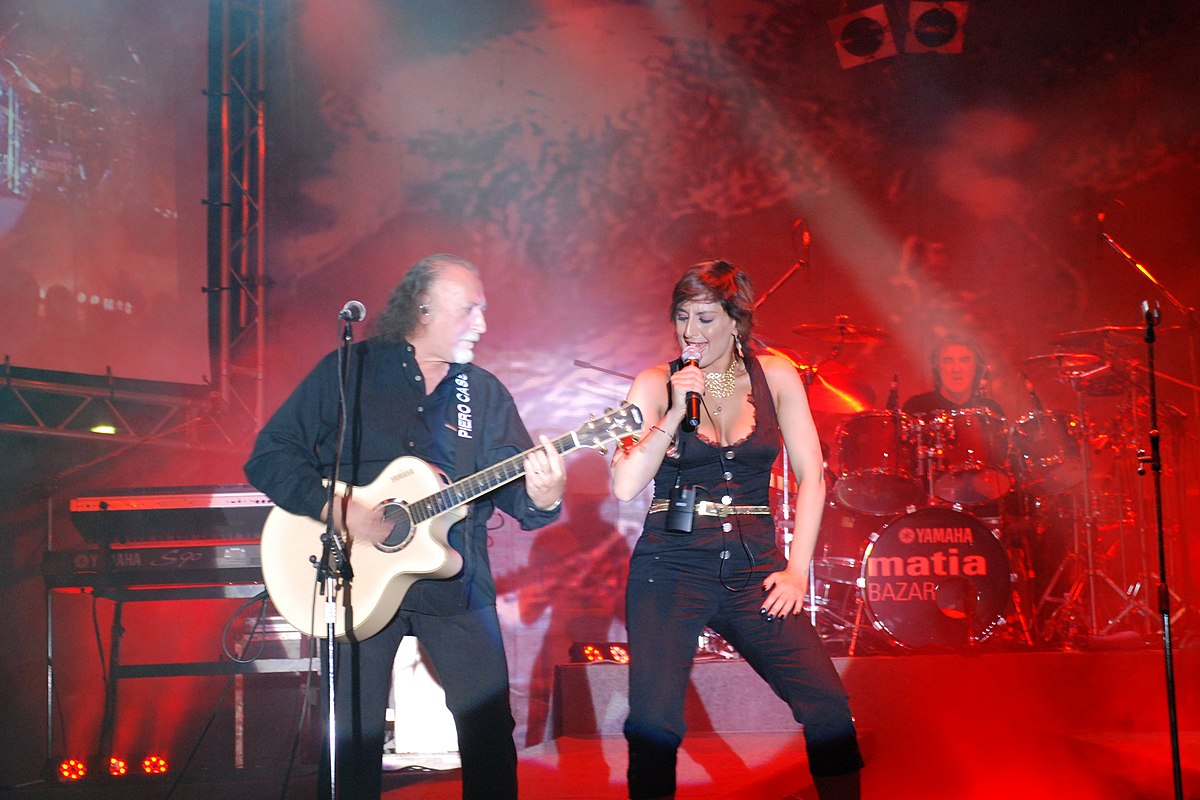 Matia Bazar was founded by Aldo Stilita in Genoa in 1975. Other original members of the band were Piero Cassano and Carlo Marrale, who had previously performed in Jet, and Giancarlo Golzi, from Museo Rosembach. Their first performances were in small student clubs, and in the middle of 1975 they relocated to Milan. Antonella Ruggiero, a student at the Academy of Fine Arts, joined the band soon after they set up shop in Milan, and the core of Matia Bazar was established. The band released their first single, “Stasera Che Sera,” soon afterward.

Their next big break came with the 1978 Festival di Sanremo, where their song “E Dirsi Ciao” won an award. The festival was televised on Intervision, giving the band their first international audiences and helping to establish them in Europe, the United States, and Mexico. In 1979, they completed their first tour of Europe and South America and won an honorable mention for their song “Raggio di Luna” at the Eurovision song contest.

In the early ’80s, Piero Cassano left the group and was replaced by Sergio Cossu, who helped push the band into a new electronic phase of their career. Every aspect of their sound became electronic, with the exception of Ruggiero’s vocals. Their music ranged from the electronic sounds that were gracing the discotheques of the time to the label that the German magazine Stern applied to their music, “tango-rock.” The band was releasing albums and singles at a dizzying pace up through the mid-’80s: recording during the autumn and winter, releasing in the spring, and touring in the summer, every year.

1986’s release Mel’o, which had been their most successful album to date, marked the end of their electronic era, and after 1988’s Red Corner, Antonella Ruggiero left the band and they went on hiatus until 1991 when they changed labels and hired a new vocalist, Laura Valente. Valente had been hired as a pianist and vocalist, but she also proved to be a skilled guitarist and made a major contribution to the band’s new sound. After a prolonged tour, Carlo Marrale left the group and for the first time it became a quartet. 1997 brought a successful album, Benvenuti a Sausalito, and in 1998 founding member Aldo Stilita left the group because of a long illness. Matia Bazar regrouped and in 1999 signed a new recording contract with group members Piero Cassano, Silvia Midnight, Giancarlo Golzi, and Fabio Perversi.