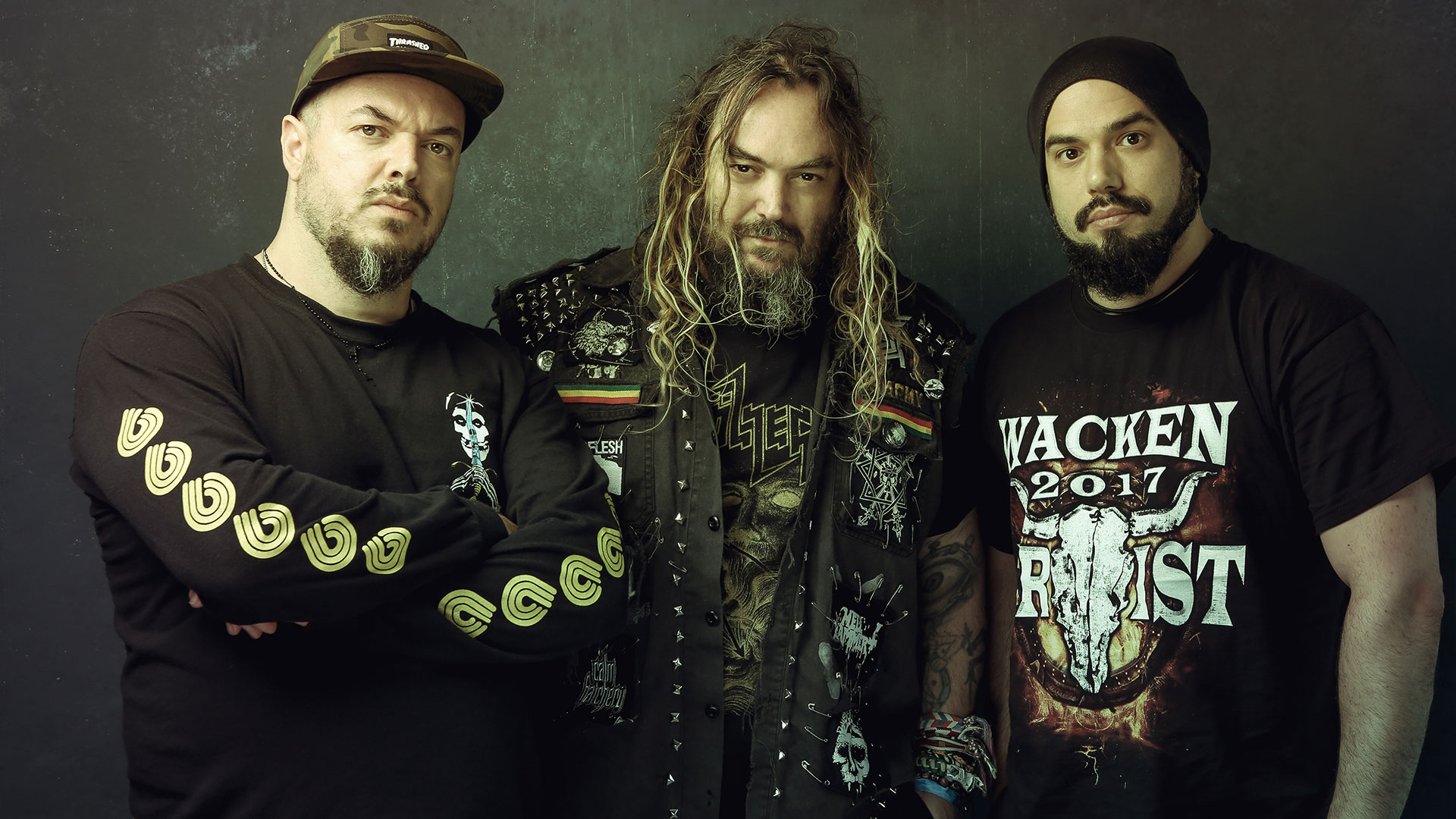 “The Cavalera Conspiracy is about a sense of being unleashed,” says vocalist/guitarist Max Cavalera. “You bottle a monster for 10 years and then let it out. It’s explosive, and we waited a long time for this beast to be set free.”

The wait is over. And the time is now. Many said it would never happen, that Max and Iggor Cavalera, the Brazilian brothers and visionaries that formed the groundbreaking metal band Sepultura in 1983 would reunite to make electrifying music together again. Despite having spent 12 years apart, the inescapable fact remains: Max and Iggor share blood and are musical soulmates. Their time away from each other fostered musical growth leading to the newly inspired metallic magic. Hence, the Cavalera Conspiracy was born. While the Cavalera Conspiracy and their Roadrunner Records debut Inflikted may seem like the closest we’ll get to a Sepultura reunion, make no mistake. The Cavalera Conspiracy is its own maniacal, untamable beast with its own set of rules.

Iggor sums up their musical connection, simply stating, “We don’t need to speak. We look at each other and we know. With one look, we know if we’re going in the right direction.” That’s how clearly they understand one another.

Max continues, “There was over 10 years of not seeing or talking to each other at all, which is a long ass time. That’s what made it more special when it did finally happen. While we were working together, I was thinking about how the last time I saw him, I was on a tour bus, after my last show with Sepultura at the Brixton Academy. Fast forward and I’m picking him up at the airport in Phoenix. It was heavy and emotional. Obviously, all those feelings, along with years of musical history, came flooding back, and once the personal relationship was restored, the musical one began to take shape.

The first seeds of the Max/Iggor reunion were planted when the duo played together at the Dana Tribute show, an annual benefit played for Max’s slain stepson. “I was playing with Iggor at a show that was so meaningful,” Max admits. “We got to play ‘Roots’ and ‘Attitude,’ which is a song I wrote with Dana. From that point on, I couldn’t help myself. I knew I wanted to record with him again. I had not done a ‘project’ since Nailbomb, which was a long time ago. Iggor loved the idea. With no name, I just wrote songs all day long. We had to find musicians, and set the mood so we could just write a kick ass record.” Iggor has similar fond memories of that show and that feeling, “Once we hit the first note, it felt like a bomb had dropped on stage. From that moment on, I knew we needed to do something together musically.”

Iggor continues, “We reunited as a family first. Naturally, music came next. At first, we had no idea we would do music again. I have my own new project, and that takes so much of my time. I had no plans at all of going back and doing a metal project. But at the same time, it was natural to play again with Max.” Max compares the situation to The Godfather Part III, exclaiming, “Just when Al Pacino thought he was out, his family pulled him right back into the shit again! That’s what I did: I pulled him right back.”

The brothers recruited Gojira guitarist Joe Duplantier to play bass. Guitarist Mark Rizzo, who plays guitar in Max’s main band Soulfly, was enlisted to play guitar. The duo purposely chose more up and coming musicians, because they didn’t want to detract from the music. “We didn’t want big names,” Max says. “It was about me and Iggor finding ourselves. This is about the music. We found cool musicians without pretension, who wanted to go into the studio and just kick ass.”

Once recording commenced, Max brought a bunch of songs he had written. Album opener “Inflikted” is an urgent, thrashy anthem designed for the most riotous moshpits, while “Sanctuary” has a classic Beneath The Remains-era Sepultura vibe. Max says, “I brought the tracks to the studio without the fury. Iggor put his ‘thunder drums’ on top of it and it became something else!” Although Iggor exited Sepultura and is working on his electronic music project, that familiar feeling coursed through his veins when he sat down to track drums. “We had no pressure on our backs. The most important thing is that we were happy in the studio; we worked a lot and it was a blast. That translates into the music,” Iggor says.

When describing the sonic assault that is “Dark Ark,” Max states, “I think “Dark Ark” is the most different song on Inflikted. My son Richie, was the first vocalist to sing on it and he set the pace for a different vocal pattern that Joe and I picked up on. It made the track more unique than the other songs.”

About half way into the album, the brothers Cavalera hit you over the head with the brutal “Ultra-Violent” which features Rex Brown of Down and Pantera on bass. “I think I gave him a very exciting, different song to work on, more of a death metal vibe. We had a great time talking about our old metal adventures,” says Max.

By the time the record was finished, Max knew that they had recaptured the magic. “My brother makes the drums sound like thunder like no one else. Not many musicians can grab a kit and change the sound and personality of the drums, but he can. It’s fucking scary.” While the Soulfly and Sepultura comparisons will undoubtedly – natch – arise, both brothers contend that the Cavalera Conspiracy is different because their tastes and influences have grown over the years. There’s less of a world vibe on Inflikted, but its every bit as dangerous, thanks to its “fuck the world” attitude. “Why do I get goosebumps when listening to this? I don’t want to know,” says Max.

According to Iggor, Inflikted’s balance of the old and the new is what he loves about it and he thinks metalheads across the globe will share the same notion. “When I listen to the album, it sounds old school, but new in its own way,” he says. “It’s a mix of both worlds. We both listened to so much different music during the time apart. Here, we each had our own input, so it came out different than back in the day.”

Summing up their personal chemistry, which is palpable on the booming “Bloodbrawl” and the uber thrash attack “Terrorize,” Max says, “I’m crazy. I used to drink. I talk. He is quiet. He has never drank before. It’s this weird combo that becomes lethal together. You either like it or hate it, but you can’t ignore it. We’re like a bomb.”