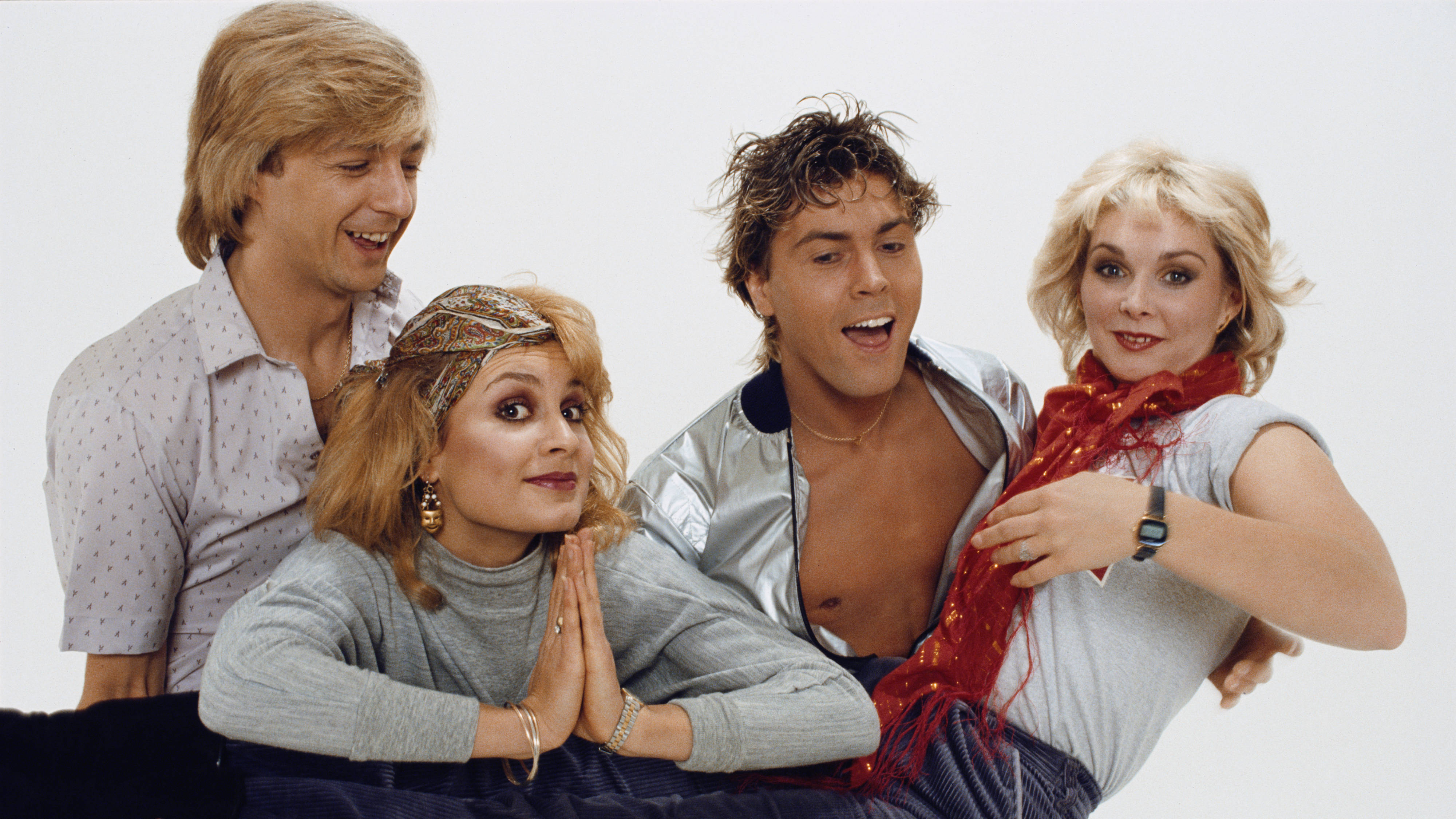 BUCKS FIZZ originally a vocal quartet formed in London in 1981, was one of Britain’s most successful acts of the 1980’s, releasing a remarkable 20 hit singles and chart albums during that decade. While the Eurovision Song Contest may not be regarded as the most trendy route to fame, it opened the door for ABBA, when they won the contest with “WATERLOO” in 1974.

Seven years later, in 1981, BUCKS FIZZ, using an identical vocal line up of two male and two female voices, also won the Contest, with their catchy “MAKING YOUR MIND UP”. The group composed of four young but experienced singers had been formed expressly to be launched via Eurovision and included Cheryl Baker, Jay Aston, Mike Nolan who had earlier worked in the group Brooks, Bobby Gubby (known as Bobby Gee) who had appeared in “Jesus Christ Superstar”.

After “MAKING YOUR MIND UP” their next two singles reached the top 20, and their fourth hit in well under a year, “THE LAND OF MAKE BELIEVE” returned them to the top of the chart at the end of 1981. 1982 brought another chart topper, “MY CAMERA NEVER LIES”, and more top 10 activity with “NOW THOSE DAYS ARE GONE” followed in 1983 by the top 20 hit “RUN FOR YOUR LIFE”, but the group were soon to be devastated by two virtually simultaneous blows.

In December 1984, whilst on tour, they were involved in a coach crash where Mike Nolan sustained serious injuries and in 1985 Jay Aston left the group. They worked less frequently for a while as everyone recuperated but still sustained several hits like “I HEAR TALK” (1984), “YOU AND YOUR HEART SO BLUE” (1985), “NEW BEGINNING (MAMBA SAYRA)” and “LOVE THE ONE YOUR WITH” (1986), and “HEART OF STONE” (1988). Shelley Preston was recruited to replace Jay Aston but, ultimately, BUCKS FIZZ decided to continue as a trio.

During this period Cheryl proved that her Talent was not limited to merely singing and branched out into television, hosting her own shows such as “Eggs & Baker”, while Bobby also benefited from television, scoring several theme songs and having a solo hit with his theme song to TV’s “Big Deal”. Mike Nolan slowly returned to full health and eventually took to the stage alone in a Xmas musical. In 1991 BUCKS FIZZ celebrated ten years together with an Anniversary tour and the release of a much awaited “LIVE ALBUM”, recorded at The Fairfield Halls, Croydon.

From then on they continued with a policy of touring and live cabaret performances. In 1993 Cheryl Baker left to start a family and to concentrate on her solo career as a television presenter. The male members Bobby and Mike, – 2 – decided to go forward and continue BUCKS FIZZ with the original format of two girls and two boys. After extensive auditions Amanda Szwarc and Heidi Manton completed the four part line up.

America, Europe, Australia and the Far East have fallen under the charms of BUCKS FIZZ, with Gold and Silver records and numerous other accolades folding in. Their live concerts have taken them all over the world and made them one of the UK’s most successful live bands. The exciting and talented new line up is certain to ensure that the name of BUCKS FIZZ will remain a major T.V., recording and concert attraction.